STARTED WITH A FOUNDARY 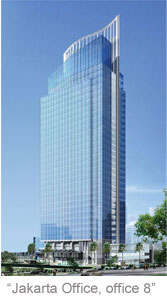 In 1981 the Indonesia introduced an overall plan to stimulate and urge the private sector to build factories for the manufacture of diesel engines, car original equipment for manufacture (OEM), generator and other manufacturing plants.

In 1984 it was planned by the Indonesian Government, that for a great deal of the required components should be supplied by local manufacturers (to be used domestic made products).

In 1987 all the required components and parts should be produced in Indonesia, whether in-house or outhouse.

In order to realize that plan and to motivate and push the private sector to participate in the overall government plant, the Indonesian Government makes provisions, that for their requirements for machines and other equipment, should be given the priority to domestic products, And indeed, the private sector shows great interest to build factories for the manufacturing of automotives and other purpose.

During the same period, conduct a study to look into possibility of setting up its own manufacturing facility.

In 1993, we started to supply to Indonesia Cars Automotive Manufacturer (OEM) with the increasing sales volume up to 70% of total capacity and 30% with set aside for export market until 1997.

In 1998, due to the economic crisis in South East Asia, in which Indonesia was not spared from crisis, has changed our company strategy from domestic market concentration to the export market orientation.

Our product is being recognized by our customers worldwide, especially in Germany. We manage to penetrate into Germany market which has a highest standard of quality, and our company with its product has earned a TUV certification. Our product also meet the OEM standard, JWL, JWL-T, VIA, SFI, SNI quality standards and specification to TUV testing standards.